The graphs below show the annual spending of a particular UK university from 1981to 2001. 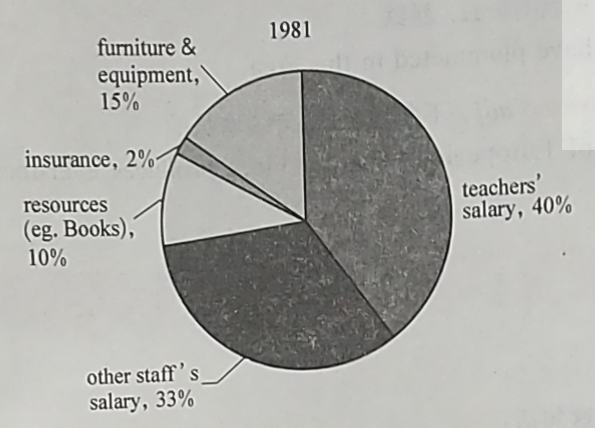 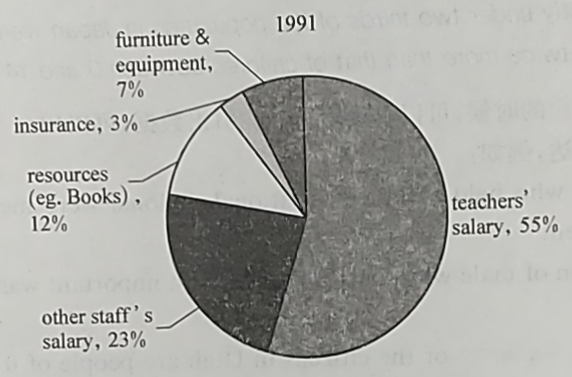 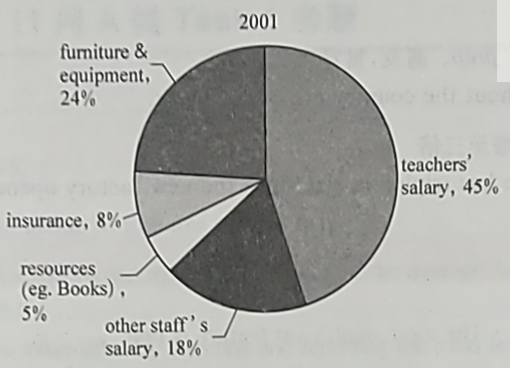 The most significant feature is that salary, including salary to teachers and to other non-teaching staff, was the major expenditure for this university throughout the20-year period. The percentage of total spending on teachers' salary was between 40%and 55%, while that on other staff's salary decreased steadily from a third to less than one fifth.

The remaining expenditures were divided between smaller items such as furniture& equipment, insurance and resources. Insurance spending continued to grow, from only 2% of the total spending in 1981 to 3% in 1991 and 8% in 2001. The percentage of total spending on resources such as books also increased slightly from 10% to 12%during the first ten years, but it dropped sharply to 5% in 2001. Spending on furniture and equipment, however, showed the most dramatic change: After being reduced by over 50% in 1991, it more than tripled to make up about a quarter of the total amount a decade later.

People throughout the country are out of work.

The workforce has tripled in size since the new factory opened.

最明显的特征是······The most significant feature is that...

The most significant feature is that salary, including salary to teachers and to other non-teaching staff, was the major expenditure for this university throughout the 20-year period.

The movement of people from agricultural areas to cities to work can cause serious problems in both places.

What are the serious problems and what measures can be taken to solve this problem?

Driven by scientific and technological breakthroughs, an increasing number of people are swarming into large cities for the sake of high living standard as well as more working opportunities. The unprecedented advance of urban areas, however, is accompanied by a series of austere problems in both cities and countries.

On the one hand, one of the largest challenges facing urbanization is overpopulation. As more and more transient population flock to cities, the limited living space and resource cannot satisfy the ever-growing population. As a result, the resource is predicted to be depleted in the near future, which leads to energy crisis.What is more, in spite of employment opportunities available in cities, such a large number of city dwellers easily give rise to high rate of unemployment.

On the other hand, there are corresponding problems arising in agricultural areas, the shortage of labor force in rural areas will inevitably widen the gap between city and country. No young people are willing to stay at home to do farm work, thus leaving a large amount of land resource uncultivated. According to a recent survey,with deficiency in food and manpower, many farmers especially the left-behind children and the elderly are likely to suffer from starvation and poverty.

Therefore, feasible measures, if possible, should be taken by government to address the problems brought by urban sprawl. The construction of infrastructure in urban areas should be optimized so that the pressure in many domains can be relieved.Priority of development in village areas should be given so that it can attract more transient population from other places to strive for local development.

In conclusion, indeed, there are better material conditions and higher. salaries in big cities now; however, agricultural areas are expected to be potential places for people to settle down if enough attention is paid. Therefore, the gap between city and town can only be bridged by mutual development.

The scientists strive for a breakthrough in cancer research.

The crowd swarmed out of the cinema after the film ended.

We are seeing unemployment on an unprecedented scale.

Father is an austere man, very strict with his children.

Her feeling of depression was transient.

The traffic noise is a constant irritation to city dwellers.

A few shanties sprawl in the weeds.

We must optimize the opportunities for better understanding.

One of the largest challenges facing urbanization is overpopulation.

The pressing issue facing us is increasing juvenile delinquency.

The problem facing the society is deteriorating environment.

The deteriorating environment has aroused the shared concern of the public.