The diagrams below show the development of the village of Kelsbey between 1780and 2000. 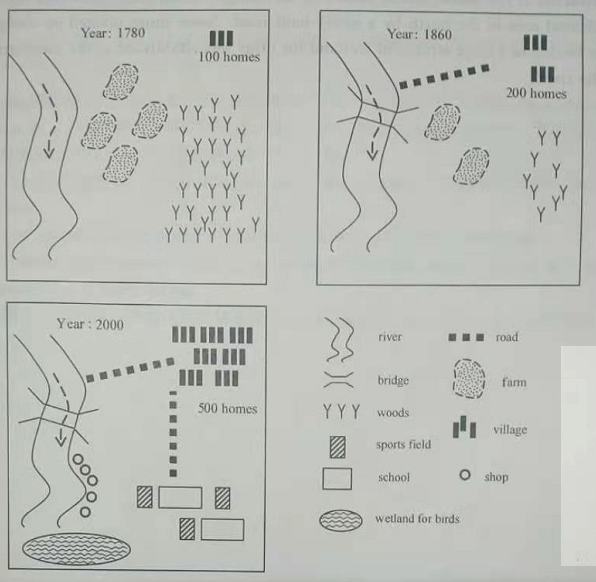 In 1780, Kelsbey had only 100 homes, but it had a large expanse of woods in the eastern part of the village and four plots of farmland in the middle. In the west there was a river running from north to south.

The year 1860 saw a doubling of the number of homes, but the size of farmland and woods was reduced by half. In the same year, a bridge could be seen over the river and a road was constructed linking the river to the residences.

140 years later, the number of homes more than doubled to 500, but farms and woods completely disappeared. Several school buildings and sports facilities were constructed at the south-eastern corner of the village, which were connected with the residential area in the north by a newly-built road. Some shops opened up along the river bank and a large stretch of wetland for birds was established at the southern end of the river.

She gazed at the immense expanse of the sea.

There are several plots of land for sale.

This particular stretch of coast is especially popular with walkers.

The year 1860 saw a doubling of the number of homes, but the size of farmland and woods was reduced by half.

The year 2005 saw a dramatic increase in the number of flights between the two countries.

The school has seen a slight enrollment increase over the past decade.

Tourism was severely affected by news of violence in the region and hotel occupancy saw a sharp decline.

A tendency that the news reported in the media focuses on problems and emergencies rather than the positive developments is harmful to both the individual and the society. Do you agree or disagree with this statement?

Taking a quick scan of newspaper headlines or switching to major broadcasting channels for primetime news, one may be surprised by the sheer volumes of negative reports dominating the mainstream media: natural disasters are hitting many regions of the world with increasing frequency, yet the media seem tireless of reporting each and every of them in minute detail; whenever the decision-makers of the country introduce a new policy, it is often greeted with possibly the harshest criticisms thrown by many so-called experts, who often assumed infinite wisdom on these issues. If such media negativity goes unnoticed or is taken for granted by the public, it will definitely pose a great deal of harm to both individuals and society.

Granted, the excessive coverage of dire social problems that are expected to be timely addressed or emergencies that are escalating at an exponential pace dispels any lingering doubts shared by the public towards the impartiality of journalism and suspicion of any governmental interference in attempting to hide the truth from the public by means of imposing stringent censorship. However, what many have overlooked is the fact that media corporations are supposed to assume a certain level of social responsibilities in addition to reporting the events happening around the globe. Sure, reporting on compelling social issues will serve to draw public attention to what matters to their well-being and to galvanize the concerned authorities take necessary actions. But such doing will also considerably undermine public confidence in the government's ability to run the country effectively. A great deal of media reports resort to extreme wording, outrageous phrasing and condescending tones to insinuate that the government is to blame and authorities are incompetent and failing to live up to citizens' expectations. For those ill-informed readers lacking adequate sense of judgment and discretion, they may be easily misled to accuse the government of being responsible for everything that has gone wrong in their life. Media corporations may not have thought this far when they first start reporting the bad news profusely, but the way they practice journalism is evidently contributing to a society characterized by a coward, disappointing government and largely dissatisfied public.

Furthermore, imposing a strongly clear-cut, unequivocally biased view on a particular issue definitely does not fall within the definition of impartial journalism.The journalists are, by their professional ethics, supposed to present the facts rather than personal opinions and judgment and leave the assessment and evaluation of the news to individual readers. Disappointingly, the opining of many journalists in their writing has such a powerful impact in shaping the readers' mindset that the public implicitly takes the views of journalists as the facts and truths, no matter how ill-considered and unjustified those views are.

Media should be impartial; that is the bottom line. Any attempt to employ journalism as an ulterior means to brainwash the public or re-program the way the public thinks should be condemned. After all, journalists do not possess the required know-how and professional knowledge to accurately evaluate the problems;therefore, their premature judgments and reporting on many critical issues should be heeded by the public with great caution.

The sheer volume of information in the company's database will easily overwhelm any new employee.

She is examining the bacteria movement in minute detail through a microscope.harsh adj. 残酷的,严厉的

The harsh climate in Antarctica is truly unbearable, particularly in winter time.

The doubts were dispelled as soon as they sat down face-to-face and cleared misunderstandings.

The last thing China wants to do is to resort to military means to settle the dispute.

The media blamed the earthquake for the crumbling buildings.

live up to one's expectations

The kid lives up to his parents' expectation by acing the physics exam.

impose something on somebody

The government decided to impose an additional fuel tax on car owners.

Though you did not show up in the award presentation ceremony, the bottom line is: you have earned widespread recognition in the field.