The diagrams below show the problem of flooding in a UK town and two possible solutions. 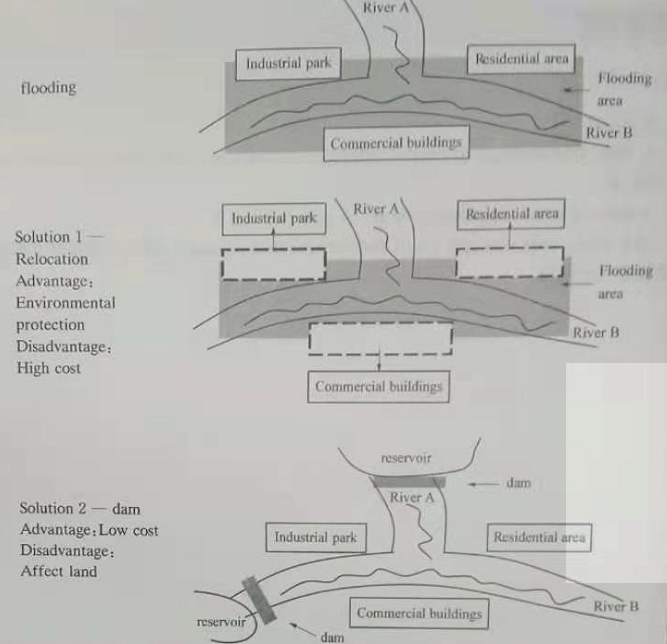 The three diagrams highlight a flooding problem in a UK town, and outline two possible solutions to this problem; one solution is less costly but affects the environment more, while the other proposal has a higher cost but is less damaging to the environment. The flooding problem occurs in an area where two rivers join to form one and the area affected contains residential housing, commercial buildings and an industrial park.

One solution to the problem is to relocate the affected development to nearby areas which are slightly further away from the river. The downside of this is that it would be very costly, but the upside is that it would result in less environmental damage.

The other solution is to dam the two rivers causing the flooding. This is a much cheaper option but would result in more area being taken up by the resulting reservoirs behind the dams thus leading to more environmental damage.

The spelling mistakes in the text had been highlighted in green.

At the interview she outlined what I would be doing.

U.N. leaders are working hard to find a peaceful solution to the conflict.

Congress has rejected the latest economic proposal put forward by the president.residential adj.住宅的,与居住有关的

You must satisfy the residential qualifications to get a work permit.

Unemployment, inflation and greater inequality are often the downside of a market economy.

The fire resulted in damage to their property.

1. The other solution is to dam the two rivers.

3. This is a much cheaper option but would result in more area being taken up by the resulting reservoirs behind the dams thus leading to more environmental damage.此句是文中结构较为复杂的一句,请注意 result in 后不能接句子,因此用 being taken up...的表达方式。此外,在thus后加动名词表达结果,也值得学习。

In modern life, it is no longer necessary to use animals as food and in other products like clothing and medicines. To what extent do you agree or disagree?

Give reasons for your answer and include any relevant examples from your own knowledge or experiénce.

As the highest link of the biological chain, we humans have been using animals,either for food or for clothing, ever since the primitive society. The advance of technology further expanded the application of animals-their body parts being employed for the treatment of human illnesses. Nowadays, however, some argue the past practice of using animals should be abandoned. And I totally support this view.

First of all, many modern diseases such as obesity, high blood fat and the resulting stroke derive from overeating rather than lack of meat, as animal meat contains much fat and calories. On the other hand, a vegetarian diet has been practiced by many health experts and proved without any side-effects. Even if you still worry about the missing of nutrients like protein or certain vitamins, you can take in them from various supplements. As for using animal fur as our clothing material, I think it is absolutely unnecessary. Modern technology has enabled us to produce a variety of synthetic materials or make better use of natural resources. That is to say,our choices of clothing material are already sufficient. We needn't wear luxury clothes made of fur for some undesirable motives, like showing off in Vanity Fair.

Furthermore, from the ethical perspective, it is imperative that we stop abusing animals. Take the shark fin for example. To pursue profits endlessly, some shark hunters try different means to capture sharks and brutally cut off their fins, dyeing the sea into red, which has aroused international indignation. Those profit-seekers forget that animals, like us human beings, have senses which allow them to feel sharp pain. And they have families. Taking a mother's life could mean despair and death for the babies. If we humans continue like this, how could we teach our young generation to respect life?

Maybe some people think we still have to use animals for medicines, either for testing experiments or for making drugs. As a non-expert, I am not sure of the necessity, but I believe the maintenance of a harmonious ecological environment will bring humans more benefits. Therefore, let us treat animals as our close cohabitants on the planet so that our future generations will have the chance to appreciate the creature diversity.

This practice has remained unaltered for centuries.

The resulting salty water will be discharged at sea.

There are plenty of vegetarian dishes to choose from.

It is said that Chinese medicines have much fewer side effects.

The roots transmit moisture and nutrient to the trunk and branches.ethical adj.道德的

It was a debate which aroused fervent ethical arguments.

Try to see the issue from a different perspective.

It is absolutely imperative that we finish by next week.

The rebellion was brutally suppressed.

The news roused discontent and indignation of the workers.

It is imperative that we stop abusing animals.

该句以为“……势在必行”,这可以用来表示作者的某种态度,又如:It is imperative that we give priority to environmental protection.

It is far from realistic that ...