The bar chart below shows the percentage of boys and girls in Australia who participated in various sports activities in 2000. 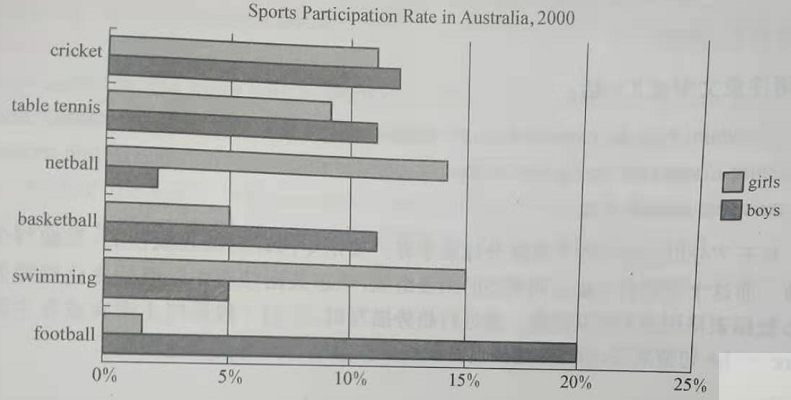 It can be seen from the chart that there were substantial differences in the proportion of boys and girls in different sports. The greatest gender difference was in football, where the participation rate was almost 20 times higher in boys than in girls(20% vs 1%). Meanwhile, boys were more interested in basketball and tennis than girls. 12% of boys were keen on basketball while only 5% of girls liked this sport.

Also 12% of participants in tennis were boys and only 8% were girls. However,netball and swimming were dominated by girls. 13% of girls played netball after school while only 3% of girls took part in this sport. Similarly, swimming was an after school recreation for 15% of girls compared with only 5% of boys.Interestingly, boys and girls participated almost equally in cricket, approximately more than 10% of both genders chose cricket as a leisure activity after school.

In conclusion, boys and girls in Australia had clearly different preference for after-school sports activities and the overall participation rate was higher among boys than among girls.

We want our involvement to have the greatest impact.

The story depicts the hero as a cynical opportunist.

Did you participate in the discussion?

He completely dominates the family.

give a proportion of each day to recreation

All those govern the overall security model of the system.

Less than 10% of Japanese think their national administration is doing a good job. Similarly, only 7% of Korean say the country's economic situation is good.

It is expected that there will be a higher proportion of old people than young people in the future in some countries. Do you think it is a positive or negative development?

In our modern society, population ageing has become a prevalent phenomenon in many countries, where it is predicted that senior citizens are more likely to account for an increasingly large proportion of the whole population. Personally speaking,there will be more problems than benefits the issue could bring for both countries and individuals.

It is undeniable that the life experiences elderly people own are much more valuable and richer, by learning from which, the younger generation could learn many lessons and avoid making same mistakes. Also, senior citizens do have more free time after retirement. Therefore, they can help do a great number of household chores, which could relieve the burden on their adult children, many of whom have both their careers to develop and their own families to provide for.

In spite of that, it is inevitable for old people to be plagued with some age-related maladies and the general and inescapable degradation of their bodily functions, which probably intensify their next generation's pressure for they have to spend more taking care of the old. Moreover, for the whole countries, the increasing number of the elderly could cause a relative rise in public resources required for pensions, health and residential care outlays, resulting in a huge financial burden for a country. Besides,more old people means that less available workers could be offered. For some countries, especially those whose national economy relies heavily on the labour-intensive industries, population ageing would hinder the development of economy and even bring about serious economic crisis.

In conclusion, according to the above arguments, the negative effects generated by population ageing, an unavoidable trend in the future, could outweigh the positive. Thus, as ageing is a normal part of lifecycle for human beings, we must recognize its challenges to our life and society, and work on effective strategies to minimize its adverse influences.

Bringing up a baby is undeniably hard work.

It's inevitable that people are going to demand in greater numbers accountability and better governance from their leaders.

She was plagued by weakness, fatigue, and dizziness.

A child dies of a hunger-related malady every six second.

Nicholson says as new troops are sent to southern and eastern Afghanistan the fighting will intensify.

In China, there are various kinds of official financial institutions, including banks and insurance companies.

The police said Mr. Hadfield's decision would have no adverse effect on the progress of the investigation.

不可否认 It is undeniable that...

It is undeniable that the life experiences elderly people own are much more valuable and richer, by learning from which, the younger generation could learn many lessons and avoid making same mistakes.

It is undeniable that playing computer games could help the development of children's intelligence.