WRITING TASK 1
You should spend about 20 minutes on this task.

The diagram below shows how to recycle organic waste to produce garden fertilizer(compost).

Sunmarise the infomation by selecting and reporting the main features and make comparisons where relevant.
You should write at least 150 words. 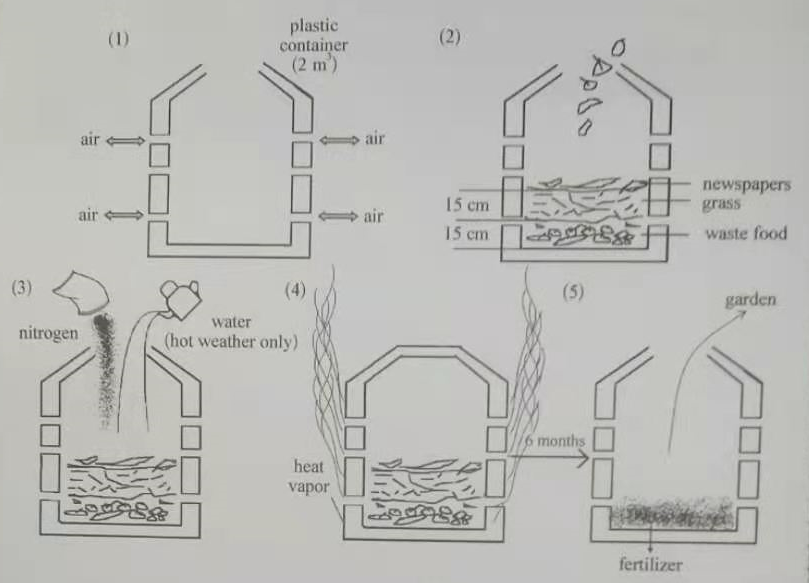 改写：
The series of five diagrams illustrate how three kinds of organic wastes including newspapers，grass and waste food are turned into a chemical mixture or fertilizer to be used for garden plans.

中间段：
A plastic container with 2m³in volume stores these wastes.On its four walls are three ties of vents for air coming in and going out. Besides，waste food lies at the bottom of container and piles up to 15 cm in height. The grass is on its top where the height is also 15 cm in thickness. Then shredded newspapers are spread over. Furthermore，nitrogen is poured in and water is needed only when it is hot in weather. With the cover tightly closed on the container，the decomposition process of these organic wastes is starting under the effect of heat and vapor begins emitting，too. The biogas arises continuously from the pile of wastes and releases out. After 6 months of fermentation，all the wastes are finally converted into fertilizer. This displays a chain of chemical reactions that can transform what are the wastes to something useful for garden，even valuable.

词汇：
Organic  adj.有机的、器官的、组织的
They want to improve the soil by adding organic matter.
Pile up堆积、积累
Work always piles up at the end of the year.
Shred  v. 撕碎、切碎
He was accused of shredding documents relating to the case.
Pour  v. 灌注、倾泻、涌入
Although I poured it carefully，I still managed to spill some.
Continuously  adv. 连续地、持续地
She was in employment continuously until the age of sixty-five.
Fermentation  n.  发酵
Sugar is converted into alcohol by a process of fermentation.
Convert  vt.  使转变、转换
Hot water is converted to electricity by a turbine.

Many countries spend a lot of money on art. Some people think investment in art is necessary, but others say money is better spent in improving health and education.Discuss both these views and give your own opinion.

I definitely agree that the government is wasting public money on art when there are much more important things to spend money on, such as improving medical and educational service. Art is an indulgence for a few developed countries. Most other countries have other priorities.

I read on a reputable website that the nutrition in some areas is so poor that many babies don't survive past the first year and that life expectancy is less than 50 years. I feel terrible when I read these reports and my heart goes out to these people. I spent a month doing volunteer work in a village in western China last summer holiday and I saw these conditions with my own eyes.

I ask, "What should our priorities be?" Surely living people are higher priority than inanimate statues. It seems to me that the government cares more about appearances, having cities look impressive, than the lives of people. The money that is spent on public art projects should be stopped and diverted to humanitarian projects, education, agriculture etc.

Some people will assert that art is important in society, and I agree, it is. There will always be artists. My argument is that in a developing country we have to pay attention to the basics first. The issue here is whether public money should be spent on art and I don't think it should, not when people are living (and dying) in poor conditions.

For the reasons I have outlined, I believe that the government has a responsibility to provide for the basic needs of people before it finances decorative art projects.

Sports cars are an expensive indulgence.

Financial security was high on his list of priorities.inanimate adj.没生命的,单调的

A rock is an inanimate object.

The course of the stream has now been diverted.assert v.断言,声称

She continued to assert that she was innocent.