The graph shows the number of Internet connections in five countries between 2001and 2002 and the table shows the rate of growth during the same period. 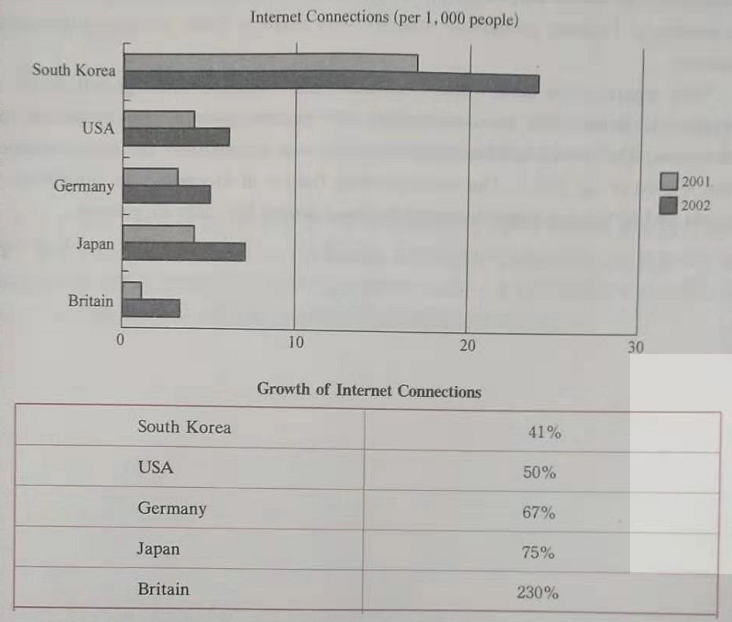 The graphs provide an overview of the Internet connections in five developed countries in two different years when they all experienced an upward trend but with different rates. Overall, South Korea had the highest proportion of Internet connection while Britain showed the quickest growth rate.

The most significant feature is that the Internet penetration rate was the highest in South Korea in both years. About 18 in per 1,000 people had access to the Internet in 2001 and this figure rose rapidly to almost 25 in per 1,000 persons in 2002. Both numbers over tripled those of any other nations. Even in the US where computers and Internet were invented, the Internet connections were only around 5 and 7 per 1,000residents in the two years. Japan indicated more or less similar figures and it is closely followed by Germany. Surprisingly, UK witnessed a nearly two-folded growth though the number of Internet connection was still very small in 2002, compared with other countries.

With regard to the table which illustrated clear figures of their growth rates. As is expected, Britain had an astonishingly 230 percent growth rate in its Internet connection. The second quickest increasing rate was in Japan but the figure was only about a third of the UK's. The corresponding figures of Germany and USA were 67percent and 50 percent respectively while South Korea had only 41 percent.

We found each cask leak more or less.

He was astonishingly adept at manipulating the big machine.

You will be punished in a way corresponding to your profession.

... when they all experienced an upward trend but with different rates. Overall,South Korea had the highest proportion of Internet connection while Britain showed the quickest growth rate.

In some countries, secondary schools aim to provide a general education across a wide range of subjects. In others, children focus on a narrow range of subjects related to a particular career. For today's world, which system is appropriate?

It has always been a controversial issue over whether general education or specific education is deemed more suitable for children. Even though some people argue that the latter alternative could prepare students better for future employment, I firmly believe that both educational systems are required in children's development.

It's an undeniable fact that children would be much better off if they have access to abundant knowledge in a diverse range of fields. This is necessary for them to deal with a multitude of problems they might encounter in their daily life. For instance,simple mathematical calculations would come to the rescue in case of totaling up the bill; fundamental knowledge of chemical terms would be of huge assistance if you are picking up prescriptions or drugs in a pharmaceutical store; malfunctioning electrical appliances due to ignorance of basic knowledge of electricity could be quite unsettling;current affairs including momentous events happening in spheres of economy or politics around the globe are often considered good conversation-openers in occasions of social mingling or business dinner. Hence, it's somehow necessary for children to receive general education in their early stage of schooling.

As children grow up, specific education on teaching one or two particular subjects are thought more useful for them. This is simply due to the fact that a significant proportion of general knowledge imparted to students in secondary or tertiary education would have most likely been forgotten once they start their career. The jobs available nowadays increasingly demand job seekers with one particular skill.Therefore, it's more sensible to place students on a more focused education once they reach the phase of secondary education. In this way, students could be more prepared for their work ahead.

In conclusion, both general and specific education play equally important role in children's various stages of their life. It's reasonable to take advantage of both educational systems so as to develop their potential to the fullest.

Winston Churchill and Richard Nixon were both controversial figures.

These elements can be combined in a multitude of different ways.

These drugs are not available without a prescription.

He was killed when his parachute malfunctioned.

The country's economic crisis had an unsettling effect on world markets.momentous adj.重大的,重要的

The 2008 Olympic Games is a momentous event in China.

Children should always be imparted advice from their parents.