The bar chart below shows the passenger kilometres traveled by different means of transport in the UK in 1990 and 2000. 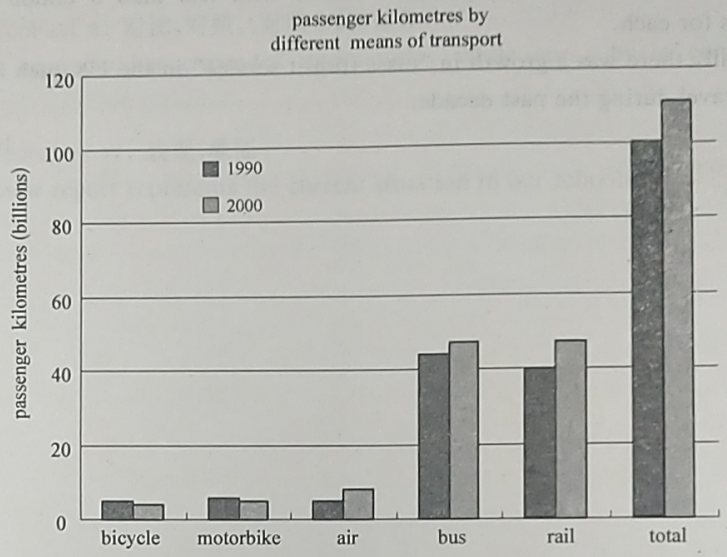 The bar chart compares 5 different means of passenger transport in the UK for the years 1990 and 2000 in terms of total passenger kilometres travelled.

In 1990, a total of 100 billion passenger kilometres were travelled by UK residents using the surveyed transportation methods, which went up slightly by about10 billion to reach 110 billion 10 years later. This rise in passenger kilometre number was recorded in air, bus and rail travel but a slight decline was actually found in bicycle and motorbike travel.

In this survey, buses and trains were the principal modes of public transport during the last decade in the UK, each with between 40 and 50 billion kilometres travelled. By contrast, the annual distance covered by bicycle, motorbike and air travel only represented an insignificant share, with less than 8 billion passenger kilometres for each.

Overall, there was a growth in "mass transit service" in the UK such as air, bus and rail travel during the past decade.

The savings, both in terms of time and money, could be considerable.means n.手段,方法

She tried to explain by means of sign language.

There has been a steady decline in public services over recent years.

Prices have risen sharply in the last decade.

Their economy has expanded enormously, while ours, by/in contrast, has declined.

This new report represents the current situation in our schools.

International tourism has become a huge industry in the world. Are the problems that international travelers cause greater than the advantages they bring?

Unfortunately, all countries have within them people who exhibit undesirable behaviour. The vociferous minority seem to leave an impression in the minds of people in host countries. Whether it be leaving the hotel room in a complete mess, or loudly arguing about a matter with a local person, international visitors are sometimes a poor advertisement for their countries. This is certainly the negative side of international visitors.

These prejudices are particularly prevalent among people living in the North.

There is a wide variety of patterns to choose from.

Fatal road accidents have decreased in frequency over recent years.

The risks are vastly outweighed by the potential benefits.

They will be exhibiting their new designs at the trade fairs.

It would be highly undesirable to increase class sizes further.

There was a vociferous critic of the president's stance.

They are hoping a change of leader will inject new energy into the movement.ambassador n. 大使

The best ambassadors for the sport are the players.