The graphs below show the size of the ozone hole over Antarctica and the production of three ozone-damaging gases from 1980 to 2000. 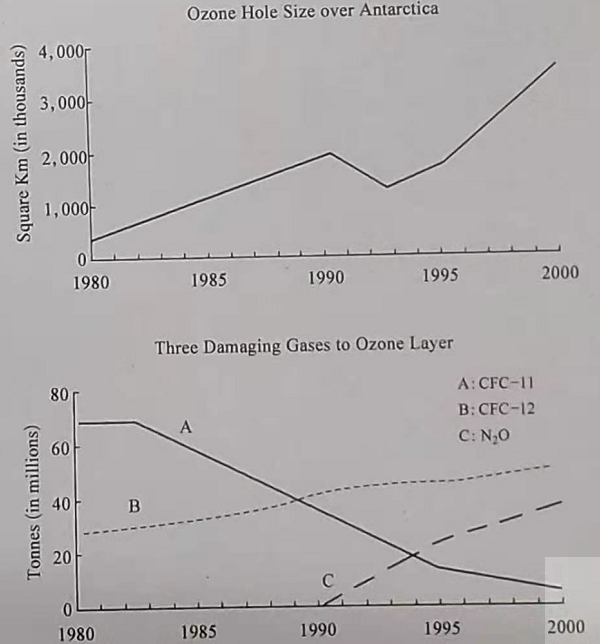 The two line graphs illustrate the change in the ozone hole size over the Antarctica region and the amount of three gases produced which caused damage to the ozone layer during the same period.

The ozone hole was at its smallest size of about 400 thousand square kms in 1980,but 20 years later, it was enlarged by 9 times to 3.6 million square kms. The only period when there was a reduction in size was in the early 1990s (from 2 to 1.2 million square kms).

Overall,the two graphs indicate that it was mainly CFC-12 and N₂O which gave rise to the expansion of ozone hole over Antarctica in the last two decades of the 20th century.

He said he had sharp pains in the stomach region.

We stripped several layers of paint off the door.

After several part-time jobs, he's now got a stable job in a bank.

His time for the 100 metres surpassed the previous world record by one hundredth of a second.

Antihistamine is indicated for this patient as a treatment for her allergies.

International support has given rise to a new optimism in the company.

The number of divorces showed a slightly upward trend since the late 1990s.

What should be done to encourage people to protect the environment?

Humans have been damaging the environment ever since we realized our powers to harness nature. Global warming and air pollution are now frequent headlines on TV and in the newspapers all over the world which keep reminding us of our obligation to protect the environment. However, few actions are actually being taken at the individual level and I think there are two major reasons why people are being so indifferent.

The first reason is that many people consider the environmental problem as a future concern. Environmental reports often warn us of the dire consequences of climate change or energy crisis 100 or 200 years later. As a result, many people feel that money and time is better spent on solving more immediate problems such as housing shortage and traffic congestion than on preventing a disaster that is only predicted to happen in the future. Also, people feel that the environmental problems are too complex for individual people to cope with. Indeed, a combination of factors cause environmental problems, many of which are impossible to be controlled through individual actions.

The above attitudes are understandable but are obviously mistaken, so the government needs to take proactive measures to make people more environmentally responsible. They can make more public service advertisements to encourage people to consume more green products instead of disposable goods that are harmful to the environment. They can also offer more incentives to people who have been active in cleaning up the neighborhood or severely punish those who have been unfriendly to the environment.

There is always a dilemma between environment and development, but as an individual we can do something to reduce the negative impact of human activities on the environment. Certainly we do not want to see the Earth turn into an uninhabitable planet.

There is a great deal of interest in harnessing wind and waves as new sources of power.

You have a legal obligation to(=The law says you must) ensure your child receives a proper education.

He found it very hard teaching a class full of indifferent teenagers.

There is little incentive for people to leave their cars at home when public transport remains so expensive.

He bought a disposable camera to take pictures while traveling to Europe.

Companies are going to have to be more proactive about environmental management.

She faces the dilemma of disobeying her father or losing the man she loves.

If there's no roof then the house is uninhabitable.

The above attitudes are understandable but are obviously mistaken, so the government needs to take proactive measures to make people more environmentally responsible.

The following measures/actions must be taken in order to solve the environmental problems.

Immediate actions should be taken to ensure the safety of the residents.